Home > Internet > How to Block Emails on Gmail

How to Block Emails on Gmail

Steps to block emails on Gmail:

Blocking an email on Gmail is the easiest job. All you need to do is just add a sender to the blocked sender's list and the sender will be blocked. Here’s how to block emails on Gmail.
Step 1: Log into your Gmail account via mail.google.com.

Step 2: go to your Gmail inbox and open a message from the sender you want to block.

Step 3: click the drop-down icon (small triangle icon appears at the top right corner of the message window as shown in the picture below). 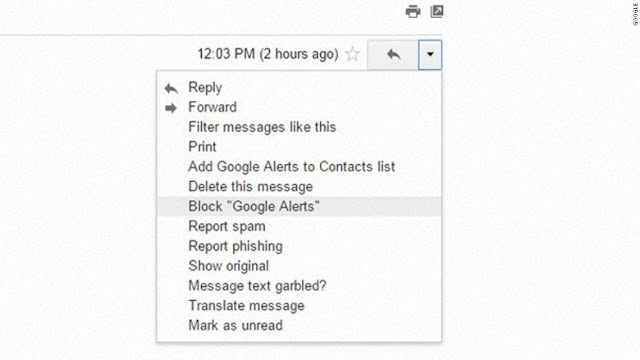 Step 4: under the drop-down menu, select block the sender option.

Step 4: once you click on block sender option, you’ll be asked to confirm that you really want to block the sender. To block the sender click Block in the pop-up window as shown in the picture.

So, this is how do I block someone from emailing me on Gmail. You can block as many emails as you want on Gmail. Just follow the same procedure every time you want to block an email on Gmail. Once you block a sender on your Gmail account, all the messages sent by that person will be stored in the junk folder.
Note: you’ll find that for some sender such as Google the drop-down menu item block SenderName is not available hence you can’t block a sender using the above method. In that condition, you can block a sender using the following method. You can try this method to block a group of similar emails. Find out the method below.

Block a sender by defining a rule in Gmail

Google allows you to create a filtering method to automatically move messages from specific sender to trash folder. This is probably the best way to block unwanted emails on Gmail. A spam filter is a feature provided by Gmail that automatically detects unsolicited and unwanted emails and prevents them from sitting in your Gmail’s primary inbox. You need to define certain criteria while creating a spam filter rule and Gmail’s spam filtering program will look for these criteria and block email messages that meet the criteria. Here’s how to create a spam filter in Gmail.
Step 1: login to your Gmail account and click on Show search options triangle icon in the Gmail search.

Step 2: type the email address you want to block under from text box.

Step 3: click create filter with this search. Makes sure Delete it checkbox is checked under When a message arrives that matches this search.

How to unblock emails on Gmail?

Step 1: login to your Gmail account and click the gear icon (settings) appears at the top right corner of the screen.

Step 4: under The following senders are blocked check the sender you want to unblock and click unblock selected sender.

Step 5: under unblock this sender window, click unblock to unblock the sender.

Thanks for sharing your valuable feedback with us. Techmeastro strives to provide better information to its users. Keep visiting this website for more tech tips and tricks.